This page details the analysis of the Traffic travelling through Wool using the data provided by WoolRATH.

The following table shows the results from the traffic survey.

Thank you to all the volunteers who capturing the numbers.

To generate this model, the Counts taken at Station Garage at 8am have been used.

The following table shows the results that will be used to create the model:

To generate the model, we also need the level crossing down times. This data is available from the Open Rail Data (Note1).

The following video shows the initial simulation using the data from above (the Crossing down times and WoolRATH data).

NOTE: The Video of the simulation has been started at ~ 8:15 to see the first crossing down. The Simulation is also running faster than real time (benny hill mode).

This simulation is based on current counts taken by people. No additional information has been used to create the simulation other than the crossing down times.

The previous simulation shows the current situation in Wool. The next stage is to show how the extra 800 homes will affect the traffic flows.

The “Potential Traffic Impacts of Development in the Wool Area” (Referred to as PTI see Note2) provides the TRICS (Trip Rate Information Computer System) estimated trip rate for an extra 1000 homes where the Vehicles are leaving at 8am. This is given as 346 over the hour. We can scale this value to give us the vehicle-per-hour for 800 houses. The result is 276.8 (rounded to 277).

The PTI uses a split of 55:45 split for West and East bound traffic. For this simulation the East/West split measured at Station Garage at 8am was used. It has also been assumed that the 277 homes will not generate any extra HGV traffic.

From the data above, the extra 800 homes will generate 141 cars between 8am and 9am heading east (towards Wareham). The other 136 vehicles have been ignored because they are heading away from the crossing.

The Video shows the Queue forming on the first crossing down (about 8:15am).

The Videos show that without the extra homes, the queue goes back as far as Linclieth Road. Adding the vehicles generated by the extra 800 homes makes the queue go almost up to Bailey's Drove. 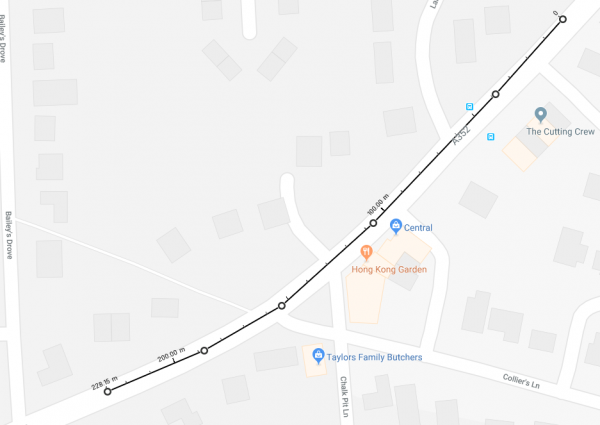 This distance is about 228m.

The original “Potential Traffic Impacts of Development in the Wool Area” (Note2) assessment predicted a maximum queue length of 82m (514m-432m, page 17, table 8.1). The simulations above show that the queue length from the extra 800 homes is closer to 228m.

The simulation does not take into account traffic coming from Lulworth into Wool past the Spar Shop. In previous simulations adding this data shows that the traffic junction by the Station will become congested and a major traffic bottleneck.

Note2: Potential Traffic Impacts of Development in the Wool Area(PTI)