This page describes a basic Traffic Simulation of the Wool Level Crossing.

For the Traffic Simulation to work we need a set of Flow data, ideally Vehicles per Hour. The existing report “Potential Traffic Impacts of Development in the Wool Area” (Referred to as PTI see Note1) has a set of figures obtained from the Automatic Traffic Counter located on the A352 within Wool.

This first simulation will use those figures to generate the flow data, this will allow a simulation to be created to model the current traffic situation detailed within the PTI report.

NOTE: The Video of the simulation has been started at ~ 8:13 to see the first crossing down. The Simulation is also running faster than real time (benny hill mode).

One of the limitations of the previous simulation is the lack of vehicle types. The PTI report does not include a breakdown of the different vehicles, however the Government Open Data site provides detailed Data sets of the traffic surveys (Note2), this includes raw manual count data collected by trained enumerators.

Using this information, it is possible to generate a percentage split of the different types of vehicle using the original vehicle counts from the PTI as a base:

So for A352 Eastbound, Total vehicle counts from Auto Traffic Counter: 401

For A352 Eastbound, Total vehicle counts from Auto Traffic Counter: 452

The video below shows the new Simulation with traffic split. Again the simulation is running fast.

It may be possible to make a more accurate simulation using the Government Open Data project Road Traffic Counts from data.gov.uk. This data is based upon survey data generated by real people instead of using a Automatic Traffic counter. This is usually performed once a year on Major roads, however the Data only contains RAW data up to 2007/2008 for The A352.

It is possible to check how accurate the 2007/2008 data is by comparing the 2008 and 2015 Road level Annual Average Daily Flow (AADL) data that is available:

This shows that there is a difference of 66 vehicles over the average daily traffic flow, or an increase of 0.77%. So basing the simulation from 2008 should be acceptable.

The available Raw Count data was extracted for all the roads heading towards Wool. This then allowed for three separate flows to be generated for traffic heading towards Wool; A352 from Dorchester, A352 From Wareham and B3071 from Lulworth. The raw Counts extracted for the relevant roads can be found in rawcountscombinedv1.xlsx. Currently the simulation is based at 8am in the morning.

The following video shows the output from the new model using the manual traffic survey counts.

The simulation above was created using flow data from:

This simulation has the following Limitations:

Once the simulation is created, the next stage is to update the flow data to include the impact of the extra 1000 homes on the traffic.

The PTI provides the TRICS (Trip Rate Information Computer System) estimated trip rate for the extra 1000 homes where the Vehicles are leaving at 8am. This is given as 346.154 over the hour.

The PTI uses a split of 55:45 split for West and East bound traffic. However from the Purbeck SHMA Summary (See NOTE4 Section 2.15, Table 4 Commuting Flows of Purbeck Residents), the following split is used instead:

This can generate the West and East Destination Table

So 92.64% of vehicles leaving the new location will head east. The new flow data with the extra 320 vehicles per hour from 8am to 9am.

The first simulation shows the queuing traffic from Lulworth before the crossing goes down. This is a major difference from the previous simulations without the extra 1000 homes where there was only a small queue (~4 vehicles) while the crossing was up.

This second simulation shows the first time the crossing goes down. The simulator shows that the resultant queue goes all the way back to Dorset Green.

The SUMO traffic model can also output the emission for a given road edge. The following graph has been generated using the default emission profile for a point close to the crossing. It only shows the emissions for vehicles travelling over that point. The Graph shows the NOx g/km/h. 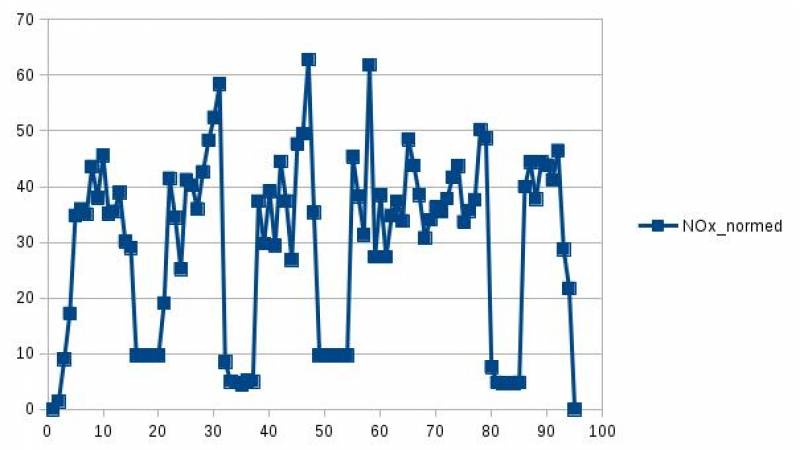 The graph shows that the the NOx exceeds 60 g/km/h after the crossing re-opens.

The simulation above is just a proof of principle, without some sort of validation it is difficult to know how accurate or inaccurate the model is.

There does appear to be a difference between the Auto Traffic Counts and the Manual Traffic Survey. The ATC was reporting 401 from west to east along the A352, the Survey had counted 561. From East to West, the ATC reported 452 where the Survey counted 371. This is probable because the ATC was taken in March, while most of the Survey data was taken in July and September.

The Model can be downloaded from https://github.com/mretallack/WoolSimulation/

The following things still need to be done to complete the model.

Note1: The “Potential Traffic Impacts of Development in the Wool Area” (PTI) can be found via the WoolRath Facebook page